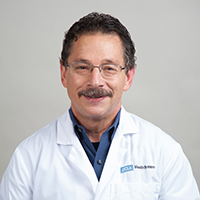 Donald B. Kohn earned his bachelor’s and master’s degrees from the University of Illinois, Champaign-Urbana and his medical degree in 1982 from the University of Wisconsin School of Medicine. He completed a pediatric internship and residency in Wisonsin followed by a medical staff fellowship in the Lymphoid Malignancies Branch (formerly the Metabolism Branch) of the National Cancer Institute. He began working on gene therapy as a fellow at the National Institute of Health in 1985. He was at Children’s hospital Los Angeles, USC Keck School of Medicine for 21 years, where he rose to the rank of Professor and sered as the Head of the Division of Research Immunology/Bone Marrow Transplantation from 2002-2009. His research program studies gene therapy using hematopoietic stem cells, performing basic studies of gene trasfer and expression and translating these finding to clinical trials of gene therapy for congenital immunie deficiencies and pediatric AIDS.